This year’s Krewe of Krampus honorary Saint Nicholas, Francis Grunow, visits us from Detroit, Michigan where he is co-creator of the Marche du Nain Rouge.

The Detroit parade was founded in 2010 after a discussion between Francis and his friend, Joe Uhl, in the winter of 2009. “Joe was saying how he went to Mardi Gras in New Orleans, after Hurricane Katrina, and it was one of the most cathartic things he’d ever felt. There was a surging sense of renewal and a reestablishing of a center of gravity for the whole community,” describes Francis. 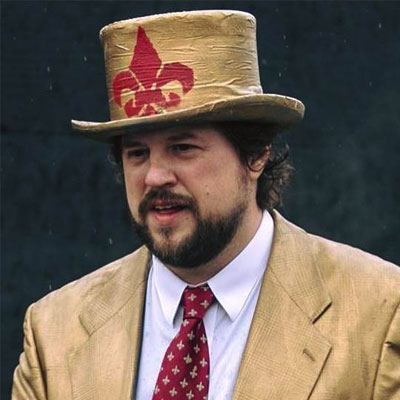 “It was then that we realized there was a void in Detroit, which needed to be filled. The city of Detroit is older than New Orleans and we needed our own Mardi Gras celebration.” They asked themselves if Detroit did have a Mardi Gras what would that look like and their response was the Marche du Nain Rouge. 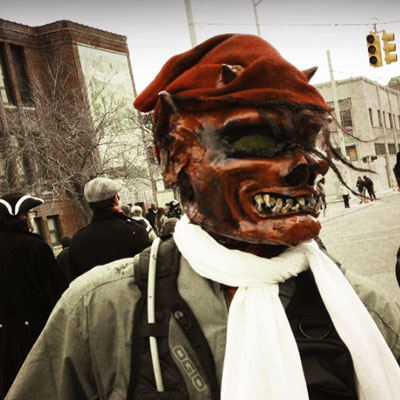 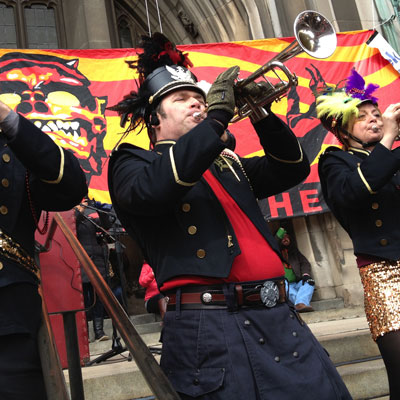 For those unfamiliar with Detroit’s legend of the Nain Rouge (red dwarf in French), this small hairy and very red creature was considered a harbinger of doom to the city. When Cadillac arrived at the settlement, which became Detroit, he was warned to appease the Nain Rouge. However, he did not and when confronted by the creature, he hit it with his cane. From then on the city of Detroit was cursed and Cadillac himself had nothing, but bad luck from that point on. Shortly after seeing the Nain Rouge, he was accused of abusing his power and sent to govern Louisiana. That didn’t last very long either and he ended up back in France, where he spent some time in prison and then ultimately lost his fortune. According to legend, whenever some one sees the Nain Rouge they and the city will only suffer misfortune and disaster.

Every spring the Marche du Nain Rouge calls for all Detroiters to don costumes, build spectacular floats, and roll out marching bands to tête-à-tête with the Nain Rouge, welcome Spring, and a prosperous new year for Detroit.

Francis was selected as the Krewe’s honoray Saint Nicholas this year, in part, for being some inspiration for the Krampus NOLAuf. Michael Esordi, founder of the Krewe of Krampus, was born in Detroit and happened to be back in his home state in 2011 to attend the Marche for a project he was involved in that explored legends around the world.

Michael kept in touch with Francis over the years and even returned for the Marche a few more times. “Seeing how much the Marche grew and how creative it was always stayed in the back of my mind,” says Esordi.

Once Michael and his wife Diana Esordi, Queen of the Sisters of Shhh, began the NOLAuf here in New Orleans, the connection became clear. During a call between Francis and Michael earlier in the year to discuss the idea of being sister parades, Michael surprised Francis with the invitation to be Saint Nicholas. Francis graciously accepted and is excited to travel to New Orleans to participate in the NOLAuf.

Both Esordi and Grunow look forward to continuing and building the connection between New Orleans and Detroit. Who knows maybe Detroit’s Marche du Nain Rouge will get a visit from the Krewe of Krampus for their 10-year celebration.